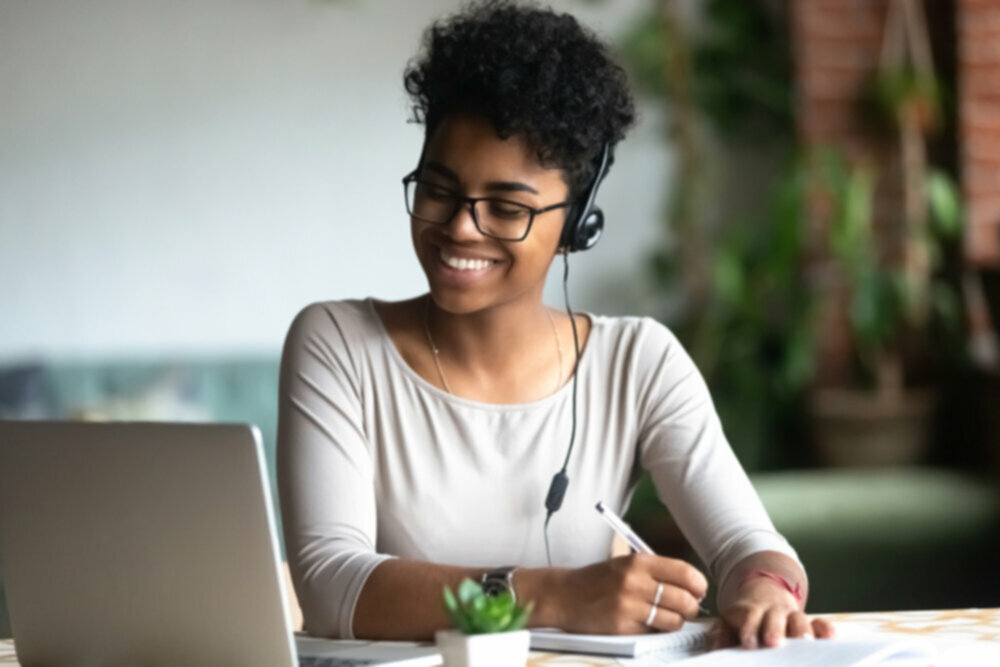 What Is Virtual Exam Proctoring?

An exam that is proctored virtually is one that’s being supervised/monitored by an approved third party (the proctor) who’s role is to confirm the identity of the individual(s) taking the test(s) and ensure the integrity of the test environment.

Virtual proctoring should allow for the same, or better, level of supervision that would occur if the test were being taken in person, just conducted through online monitoring software, allowing the student/candidate to complete the test in a location remote from the examining body and the proctor.

It’s standard practice in a virtually proctored exam for the student to confirm their identity through a webcam, whilst sharing their screen(s) with a proctor throughout the test to help identify any suspicious activity.

Concerns that have been raised historically around virtual exam proctoring that modern solutions are now answering include a student’s privacy being violated and the potential for some candidates to circumvent the software being used to monitor them in order for them to cheat.

Why is Virtual Exam Proctoring Needed?

Virtual exam proctoring, in the current climate, has unfortunately become a necessity.

Exams had to either go online or be postponed until the world comes out of it’s various, COVID-19 related local lockdowns. Once an exam goes virtual though, there’s a necessity upon the exam organiser to ensure that the right person is taking the test and that they don’t cheat; either by taking extra time or by googling the answers/using resources they shouldn’t have access to.

There’s also a tremendous cost benefit to membership organisations and exam boards that can solve the problem of virtual exam proctoring, saving them the expense of various exam centres in proximity to their candidates as well as the cost of on-location proctors.

Professional exam proctors aren’t cheap to hire/employ and, when conducted in person, it’s almost impossible to measure their effectiveness with any kind of measurable KPI.

There are three main types of virtual exam proctoring…

Live virtual proctoring has been around for years now and is probably the most common type currently in use but it’s also the least cost efficient.

In live proctored exams, the proctor will monitor the student’s video and audio whilst also screen sharing with them in real time. This ensures they take the exam themselves, don’t have anyone in the room helping them and can’t use other screens/browsers to look up the answers.

This enables the students to take the exam from remote locations with a proctor monitoring anywhere between 16 to 32 students at once.

Although this form of virtual exam proctoring does allow for remote exams to take place, it still requires an exam ‘schedule’ with just as much human involvement as though the exam where taking place non-virtually.

One method that’s becoming increasingly common is to record a student’s audio, video and screen as they take the test in real time. This means the exam can be taken at any time, subject to the convenience of the student.

A trained proctor will then watch the video/audio/screen back (typically at three to twenty times normal speed) looking for any suspicious behaviour or signs of cheating.
The fact exams can be taken at any time is a huge bonus to this method but it’s still reliant on being watched back by a real proctor, keeping the costs similar to the membership organisation and the fact that the audio/video feeds are watched back at speed can allow a level of human error to creep in.

Using AI to create a virtual exam proctor is the most recent and advanced form of proctoring.

The audio/visual/screen(s) pf the students are once again recorded but… instead of being watched live of a speeded-up recording after the event as in methods one and two, the AI integrated with the system will monito for any suspicious activity using advanced audio/visual/screen analytics and flag the recording for manual review by a trained proctor.

The software can do many thing… ensuring the students attention is on the test and not on an off camera mobile device to look up answers, it can search for suspicious noises/shapes in the background such as a person reading out the answers and it can even use facial recognition at the start of the test to authenticate the identity of the student.

Other security configurations that can be added to the software include limiting logins to specific IP addresses, the blocking of copy & paste functionality and/or freezing the screen of the student taking the test to stop them accessing other applications or browsers during the test.
This method allows membership organisations to do away with exam schedules and location constraints whilst also cutting down on the costs of professional proctors allowing the solution to be scaled effectively.

As already mentioned, virtual exam proctoring has been around for years now as the technology involved in methods one or two is relatively low tech and easy to adopt as long as both parties (student and proctor) have suitable wi-fi speeds/connection but due to the costs involved they’ve never exactly been scalable.

There’s little point swapping a physical solution for a virtual one if the benefits are limited/non-existent.

Automated or AI proctoring however represents a real stride forward in the tech at a time when the demand for e-learning is experiencing huge growth… and not just because of the coronavirus!

The modern student wants to be able to learn wherever they are, according to their schedule… and that attitude extends to their exams as well.

That shift in behaviour comes at a time when cost efficiency has never been more important so the ability to save costs on physical locations as well as physically (remotely or not) proctored exams is a massive enticement for invigilation boards.

What Should You Look Out For When Choosing A Virtual Exam Proctoring Tool?

The biggest thing to look out for when looking at virtual exam proctoring tools is ease of integration.

They’re not easy tools to build from scratch so most likely you’ll end up with an OotB (Out-of-the-Box) solution. The issue there however is that they’ll want you to use all their systems/assessment engines instead of building on your existing infrastructure and adapting it into the final solution to save you costs.

The ideal package is a layer of AI Exam Proctoring of your current systems that can built on continuously, allowing you to implement it in the shortest amount of time.

The next point to look out for is robustness. With the need for video streaming, recording and screen sharing you can’t have the platform glitching, well… ever! Not only will this adversely affect your candidates, but the reputational harm to your organisation will also be incalculable.

Being able to plug into something like Power BI from the Microsoft Stack will also give you cutting edge analytics and reporting capabilities, allowing you to learn, adapt and advance with every exam taken by staying on top of the candidate (and proctoring) experience.

Who Is/Can Use Virtual Exam Proctoring?

There’s a lot of people out in the market already making use of virtual exam proctoring including professional membership organisations, assessment providers, online education providers (or as of 2020 we can just say education providers) and certifying agencies.

How Easy Is It To Cheat During A Virtual Exam?

There are sources on the web that give students advice on how to cheat or trick a Virtually Proctored Exam but most of the ‘tips’ these sites give are ludicrously convoluted, requiring a lot of preparation to even stand a chance of working.

As time passes the AI behind virtual proctoring gets smarter and smarter, making even these techniques difficult to get away with and, even if a student does manage it in the short time… you’ll still have the physical recording of their audio/video/screen for a thorough review.

The vast majority of people will just fall in line and take the test honestly.

As we mentioned at the start of this article, one of the big historic concerns with virtual exam proctoring was that for a candidate’s privacy.

Due to the nature of virtual exam proctoring, there will always be privacy concerns, as candidate’s will most likely be completing the exams in the privacy of their own homes. The key issue to understand and implement as part of the solution is mitigating these concerns as much as possible.

The first and easiest solution is to implement a principle of minimum access.

We assume all your proctors (virtual or not) will go through rigorous vetting processes anyway but after that the system can be set up in such a way as that only those who have been vetted can ever access the data.

There’s likely regulations that will need to be confirmed to around the length of time recordings can be (or have to be) held for but again, the system can be created in such a way as that only proctors or otherwise authorised staff can see the exam footage and that after the required/legal time limits have elapsed the data is automatically deleted.

What’s Next For Virtual Exam Proctoring?

As cliché as the term ‘the new normal’ has become, when it comes to virtual exam proctoring it really does apply.

As more and more professional organisations, universities or certification bodies adopt this tech, more and more students will come to expect it as the norm and anyone not offering it will be left by the wayside.

Software that’s currently being worked on include more accurate ways to authenticate students ID through the use of biometrics through hardware like smartwatches or fitness monitors.

In fact, those same pieces of hardware could be used during the exam itself to measure changes in pulse or heartrates as red flags for cheating.

The other side to that is the ruling out of false positives.

Exams have always made people nervous but the problem with a nervous person is that they can look guilty… which is not what you want with a virtual proctor monitoring you!

This kind of technology can be used to overcome these issues. By monitoring things like pulse or heart rates an AI could be easily taught to recognise the difference in someone cheating vs someone who was just nervous.

Once virtual exam proctoring becomes the new normal (and it will) and the technology has bedded in then several other possibilities present themselves as natural evolutions of the tech. One of these could well be Adaptive Examinations.

Just think about it.

You could well be one of the first organisations to offer candidates an adaptive exam experience. Instead of offering them a fixed set of questions the exam itself could change depending on the candidate using an adaptive algorithm, offering different approaches and questions based on their previous answers or even how they answered a question.

The questions could become much more subjective, making it that much harder for a candidate to google the answers (cheat in other words) with the algorithm software reviewing the answers for sentimental analysis.